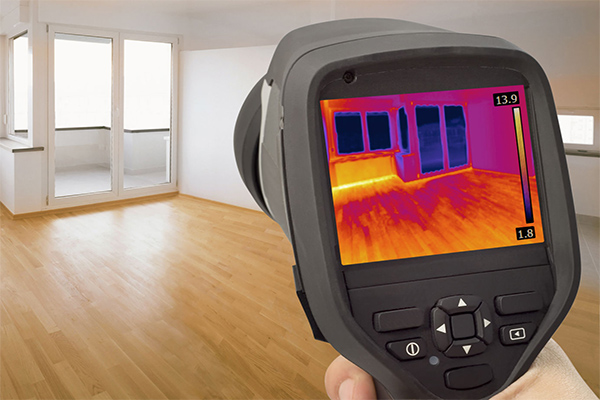 Thermography is basically the use of an infrared imaging and measurement camera that can literally "see" and "measure" thermal energy emitted from a given surface without visible illumination. This thermal energy produces a two dimensional image with a unique color gradient that relates to fluctuations in temperature and displays these thermal images on an IR camera screen that is called a thermogram.

Most building materials that are concealed behind your walls, ceilings and floors of your home will have an absolute temperature difference in a seasonal situation due to the conditioning of the living areas with heat in the winter months and air conditioning in the summer months. In New England’s ever-changing temperatures, the inside and outside temperatures will contain sufficient Delta-T if the area being scanned is conditioned with either heat or air conditioning. If the exterior temperature is the same as the interior temperature, then an infrared camera can not perform its intended function until a 10-15 degree differential is established. Again, a Delta-T is absolutely necessary for an infrared camera to detect concealed defects that I can then interpret.

Now that you understand what Thermography is, I'm going to be more explicit as to “How this technology actually works”. Thermal, or infrared energy, is light that is not visible because its wavelength is too long to be detected by the human eye; it's the part of the electromagnetic spectrum (EM) that we perceive as heat (See electromagnetic spectrum below). Unlike visible light (in the infrared world) everything with a temperature above absolute zero will always emit heat. Even very cold objects (such as ice cubes), will emit infrared images. The higher the object's temperature, the greater the infrared (IR) radiation emitted. By detecting those differentiating thermal patterns that are invisible to the naked eye, I’m able to point out concealed issues that need attention now. These findings are now brought to light and enable homeowners to perform repairs in a predictive fashion rather than in a reactive manner, which is going to be far more expensive and time consuming when these invisible issues finally become apparent.

Below, you can see that infrared starts where visible leaves off (in the EM spectrum), the color red grades into reflective infrared. This is the infrared energy reflected from the surface of an object.

To imply that infrared cameras are like X-ray machines and enable Thermographer's to see through walls and ceilings is ludicrous. By looking at the graph above, you can clearly see that infrared waves are nowhere near the same wave length as an X-ray.